BACK PAIN TREATMENT in Vancouver 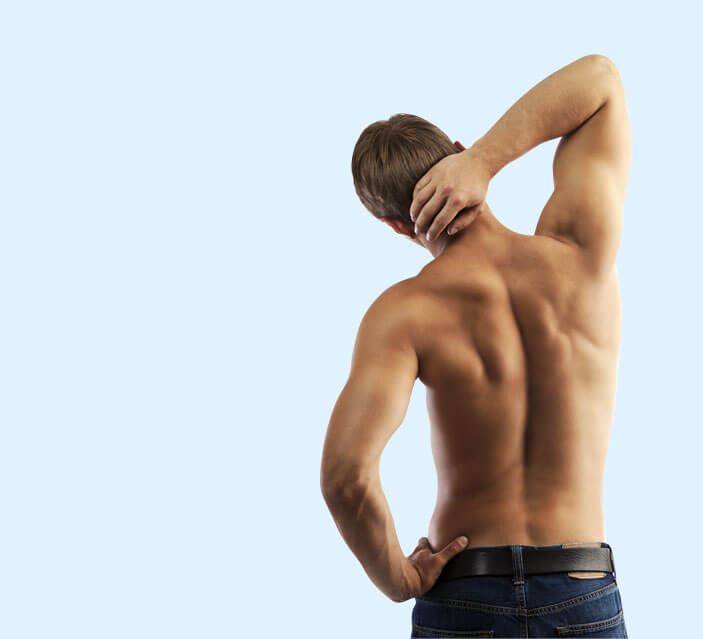 Back pain can come on suddenly and often happens when something is off in the way your spinal joints, muscles, discs, and nerves fit together and move. In the U.S., acute low back pain is the fifth most common reason people go to the doctor or miss work. About nine out of ten adults experience back pain at some point in their life, and five out of ten working adults have back pain every year.

Back pain may have a sudden onset (acute) or can be a chronic pain; constant or intermittent, stay in one place or radiate. It can resemble a dull ache, a sharp piercing or burning sensation. The pain may radiate into your extremities, and may include symptoms such as weakness, numbness or tingling.

Your spinal column is made up of a series of 24 bones called vertebrae stacked onto each other. From top to bottom, the column includes seven bones in the cervical spine, 12 in the thoracic spine, and five in the lumbar spine, followed by the sacrum and the coccyx at the base. These bones are cushioned by disks. The disks protect the bones by absorbing the shocks from daily activities like walking, lifting, and twisting.

Each disk has two parts: a soft, gelatinous inner portion and a tough outer ring. Injury or weakness can cause the inner portion of the disk to protrude through the outer ring. This is known as a slipped, herniated, or prolapsed disk. This causes pain and discomfort. If the slipped disk compresses one of your spinal nerves, you may also experience numbness and pain along the affected nerve. In severe instances, you may require surgery to remove or repair the slipped disk.

Headache is the symptom of pain in the region of the head or neck. It occurs in migraines, tension-type headaches, and cluster headaches.

The most common type of headache is a migraine. Migraine headaches are usually characterized by severe pain on one or both sides of the head, an upset stomach, and, at times, disturbed vision. Women are more likely than men to have migraine headaches. Other kinds of vascular headaches include "cluster” headaches, which cause repeated episodes of intense pain, and headaches resulting from high blood pressure. Muscle contraction headaches appear to involve the tightening or tensing of facial and neck muscles. Tension headaches are symptoms of other disorders, ranging from stroke to sinus infection. Like other types of pain, headaches can serve as warning signals of more serious disorders.

The head is supported by the lower neck and upper back, and it is these areas that commonly cause neck pain. The top three joints in the neck allow for most movement of your neck and head. The lower joints in the neck and those of the upper back create a supportive structure for your head to sit on. If this support system is affected adversely, then the muscles in the area will tighten, leading to neck pain. Neck pain may also arise from many other physical and emotional health issues. 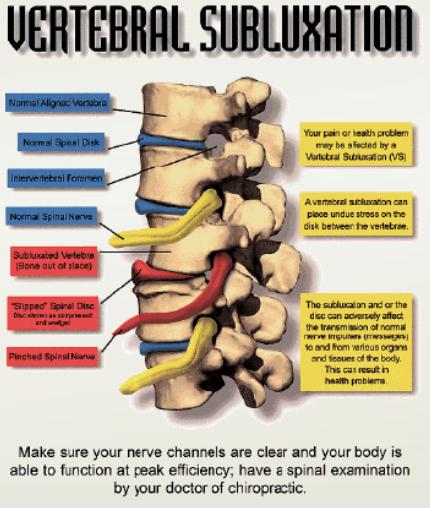 The term pinched nerve describes damage or injury to a nerve or set of nerves. The injury may result from compression, constriction, or stretching. Symptoms include numbness, "pins and needles", a burning sensation, and pain radiating outward from the injured area. One of the most common examples of a compressed nerve is the feeling of your foot or hand falling asleep. A pinched nerve can sometimes lead to other conditions such as peripheral neuropathy, carpal tunnel syndrome, and tennis elbow. The extent of such injuries may vary from minor, temporary damage to more permanent condition. Early diagnosis is important to prevent further damage or complications.

A nerve can be 'pinched' at various points, each nerve has its own characteristic 'weak points'. The most common areas of pinching is at the exit of the nerves from the spine (the foramina). They tend to get are pinched, compressed and pulled at these points. 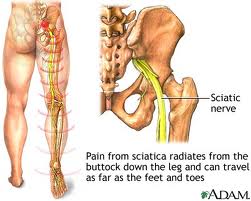 Sciatica is a set of symptoms including pain that may be caused by general compression and/or irritation of one of five nerve roots that give rise to the sciatic nerve, or by compression or irritation of the sciatic nerve itself. The pain is felt in the lower back, buttock, and/or various parts of the leg and foot. In addition to pain, which is sometimes severe, there may be numbness, muscular weakness, tingling, and difficulty in moving or controlling the leg. Typically, these symptoms are only felt on one side of the body.

Although sciatica is a relatively common form of low back and leg pain, the true meaning of the term is often misunderstood. Sciatica is a set of symptoms rather than a diagnosis for what is irritating the root of the nerve, causing the pain. This point is important, because treatment for sciatica or sciatic symptoms will often be different, depending upon the underlying cause of the symptoms. 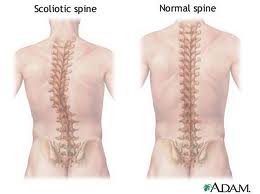 Scoliosis is a sideways curvature of the spine that occurs most often during the growth spurt just before puberty. While scoliosis can be caused by conditions such as cerebral palsy and muscular dystrophy, the cause of most scoliosis is unknown.

Any sideways, lateral or spinal curvature of at least 10 degrees, as measured on an X-ray of the spine, is considered scoliosis. However, that small a curve would not show signs or symptoms. As the curve progresses to 20 degrees or beyond, there is an increased chance noticable abnormalities may appear.

Scoliosis is generally not thought to cause significant pain, especially in adolescents and young adults. However, a scoliosis curve can cause trunk imbalances and other issues that increase the likelihood for muscle spasms and other issues, which can in turn lead to pain. 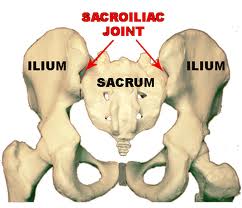 The sacroiliac joint or SI joint is the joint between the sacrum, at the base of the spine and the ilium of the pelvis, which are joined by ligaments. It is a strong, weight bearing joint with irregular elevations and depressions that produce interlocking of the two bones. The human body has two sacroiliac joints: a left and a right joint that often match individually but are highly variable from person to person. 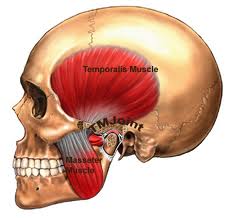 The temporomandibular joint (TMJ) acts like a hinge, connecting your jawbone to your skull. You have one joint on each side of your jaw. TMJ disorders are a type of temporomandibular disorde (TMD) can cause pain in your jaw joint and in the muscles that control jaw movement.

Temporomandibular joint disorder (or dysfunction) is used to refer to a group of problems involving the TMJs and the muscles, tendons, ligaments, blood vessels, and other tissues associated with them. Some practitioners might include the neck, the back and even the whole body in describing problems with the TMJs.

The exact cause of a person's TMJ disorder is often difficult to determine. Pain can occur due to a combination of factors, like genetics, arthritis or an injury to the jaw. In most cases, the pain and discomfort associated with TMJ disorders is temporary and can be relieved with self-managed care or nonsurgical treatments. Surgery is typically a last resort after conservative measures have failed, but some people with TMJ disorders may benefit from surgical treatments. 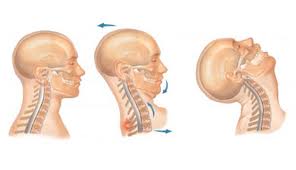 Whiplash is a neck injury due to forceful, rapid back-and-forth movement of the neck, like the cracking of a whip. Whiplash most often occurs during an automobile accident if you've been hit from behind, however, the injury can also result from a sports accident, physical abuse or other trauma.

Common signs and symptoms of whiplash include neck and back pain, stiffness, sensory disturbance (such as pins and needles) to the arms and legs, and headaches. Symptoms may appear directly after the injury, but often are not felt for a few days. 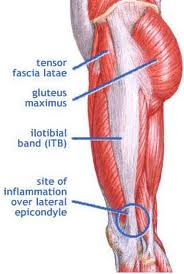 ITBS is one of the leading causes of lateral knee pain in runners. The iliotibial band is a superficial thickening of tissue on the outside of the thigh, extending from the outside of the pelvis, over the hip and knee, and inserting just below the knee. The band is crucial to stabilizing the knee during running, moving from behind the femur to the front while walking. The continual rubbing of the band over the lateral femoral epicondyle, combined with the repeated flexion and extension of the knee during running may cause the area to become inflamed.

ITBS symptoms range from a stinging sensation just above the knee joint (on the outside of the knee or along the entire length of the iliotibial band) to swelling or thickening of the tissue at the point where the band moves over the femur. The pain may not occur immediately during activity, but may intensify over time, especially as the foot strikes the ground. Pain might persist after activity. Pain may also be present below the knee, where the ITB actually attaches to the tibia.

ITBS can also occur where the IT band connects to the hip, though this is less likely as a sports injury. It commonly occurs during pregnancy, as the connective tissues loosen and the woman gains weight -- each process adding more pressure. ITBS at the hip also commonly affects the elderly. ITBS at the hip is studied less; few treatments are generally known.

Have your questions about Chiropractic & Massage Therapy in Vancouver answered by Dr. Michael Horowitz, by filling out the form below:

Have questions about Hycroft Chiropractic & Massage?
Ask Dr. Michael by calling 604-733-7744 or by filling out the form below.